Fintech in Africa: Overcrowded, just enough or not enough? by CEO of Fincra

Cross-border payments that connect Africa to the rest of the world remain primarily unsolved; this is a mission that drives us at Fincra

Since the start of the tech boom in Africa, the financial sector has enjoyed tremendous hype, with news of African fintech companies raising funds being a dime a dozen in tech media. It’s a true reflection of how much the fintech sector has been a funding magnet from venture capitalists and investors.

As investments in startups across Africa keep growing, fintech has continued to take a large chunk. In 2021 alone, fintech received 50% of the over $2 billion raised by African tech startups, according to data from tech industry researchers Disrupt Africa. Total investment in the sector passed the $1 billion mark in 2021, equaling the sum of investments made the previous year in the broader African tech startup ecosystem. This has been the trend since 2015 when Disrupt Africa started data gathering on the African tech ecosystem.

Being the most promising sector for securing investments has also increased the value of these companies, and this success has seen five fintech unicorns of the seven in the broader tech African ecosystem. This success has contributed massively to the hype that has made the fintech sector very well known.

However, this hype has been over-indexed and often prompted the social media discourse that there are too many players in the African fintech space. 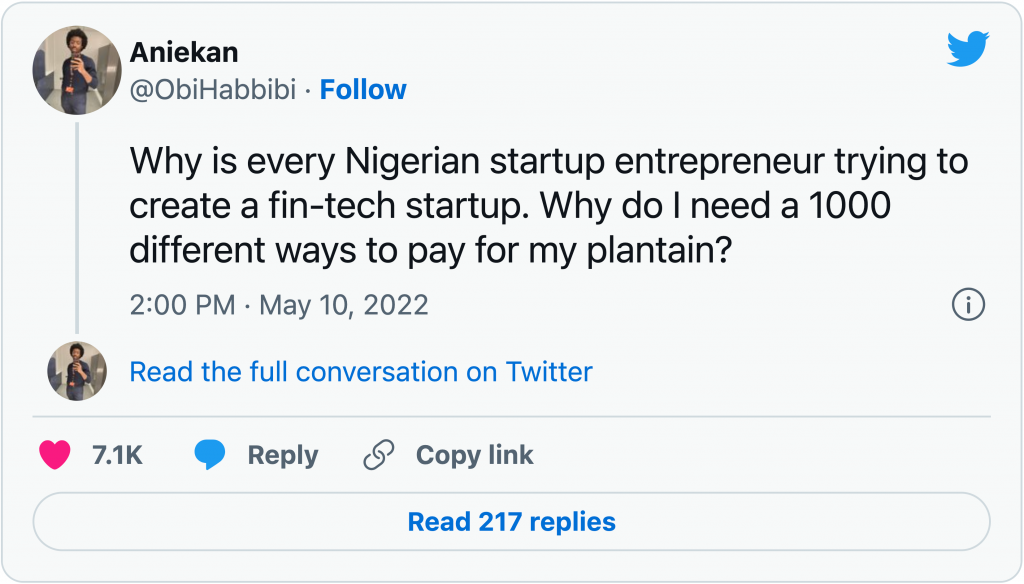 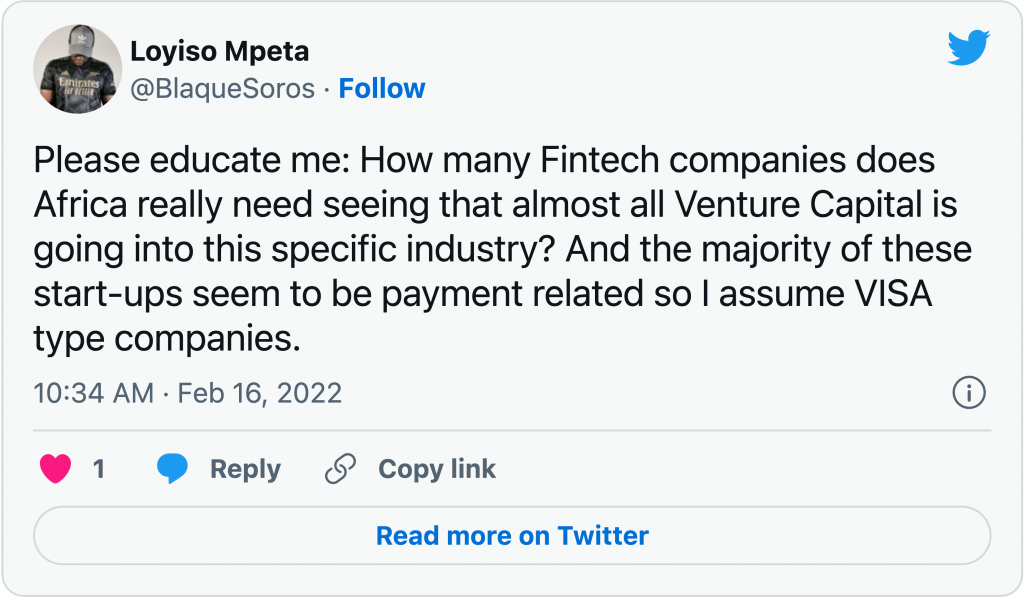 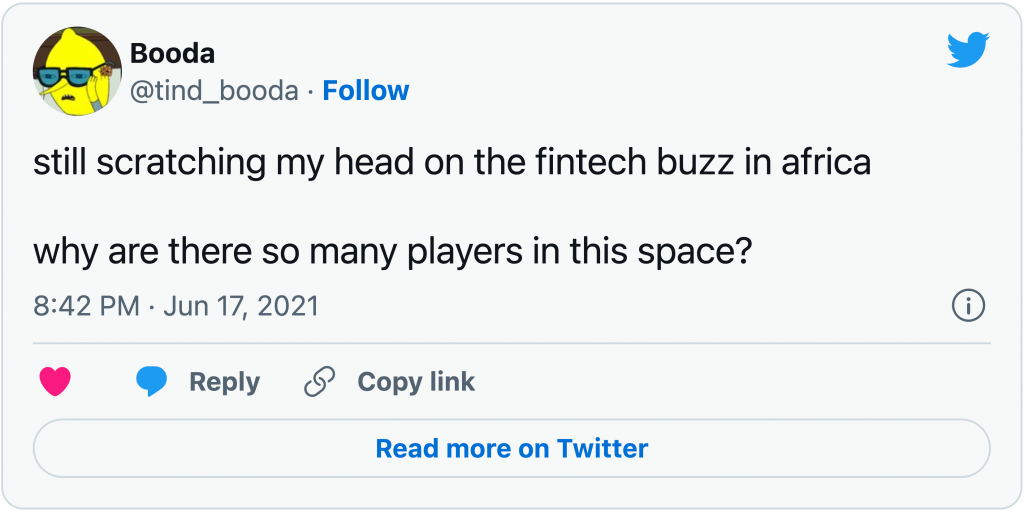 Aside from fundraising, another reason for this discourse is the misconception that fintech is only about payments, but the sector goes beyond that vertical. According to 2021 data by Disrupt Africa, there are 573 fintech startups in Africa across the different verticals of the industry- Paytech (payments and transfers), Lendtech (Jumo), Banktech (digital and neo banks), Insurtech, Blockchain and Cryptocurrency. Several other fintech verticals also deal with investing and trading, personal finance management, etc.

Narrowing it down, Nigeria, for instance, has 144 fintech companies in the country; payment, mobile money and digital banking share 38% of the fintech market, 23% deals with lending, 15% on savings, investment and crowdfunding, 13% on business services and infrastructure, 8% on cryptocurrency and 3% on insureTech. This data from EY suggests a widely spread ecosystem. 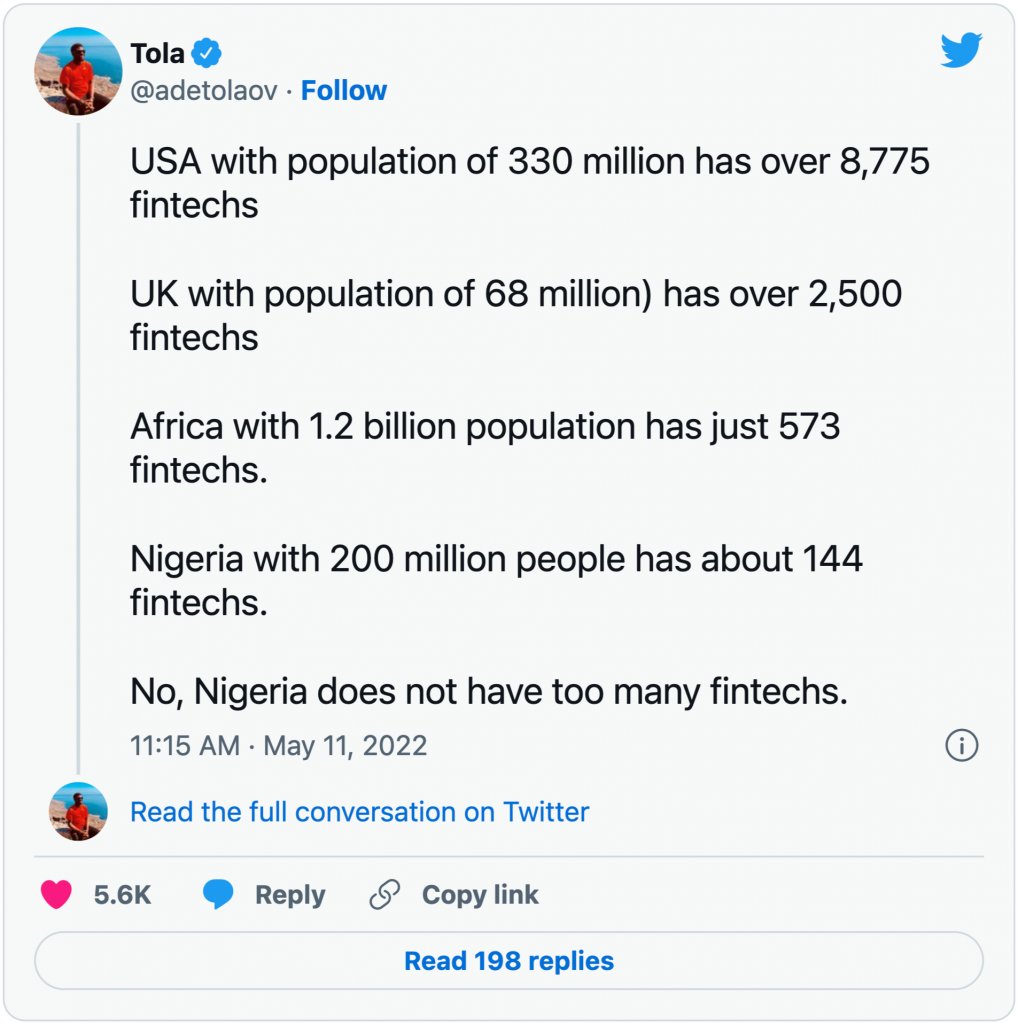 In truth, the payment vertical of the fintech industry is by far the most active in Nigeria and Africa. Still, for a population of 200 million people (Nigeria) and 1.2 billion (Africa),  the narrative that we have ‘too many fintechs’ is not valid.

Despite the hype, fintech has not scratched the surface of challenges in the continent still characterised by less developed financial infrastructure and an unbanked population. The challenge of financial inclusion is still rife with a great deal of innovation and technology needed to ensure that more Africans have access to financial services that can drive economic growth.

Economic development is almost impossible without financial inclusion, and Africa is still lagging behind other continents. Financial inclusion goes beyond what is currently obtainable in Africa; sending and receiving money, accepting payments, agency banking and remittance etc. There is still a need for a well-functioning infrastructure in Africa that empowers individuals and businesses to engage more actively in the economy.

Fintech creates new and innovative solutions for businesses and individuals in several ways apart from payment. There is a need for more players in sub-verticals like digital loans, crowdfunding, and the relatively new phenomenon of reg tech. These fintech verticals are closing the gap between the people and financial services in different ways, giving people the chance to save and invest money, and borrow, all without the lengthy and tedious process of traditional banking.

There is still more to come with the fourth industrial revolution using blockchain technology, artificial intelligence and augmented reality to deliver a better customer experience for fintechs.

Invariably, the belief that there is ‘too much fintech’ in Africa most times applies to just Paytech. However, even this sub-sector still needs more players to capitalise on the numerous opportunities in Africa’s growing economy.

With the rapid expansion in digital, Paytech has the opportunity to move from being a sub-sector into a major one. The ever-changing customer expectation will bring more demand for online and digital payment avenues, which means more growth in the Paytech category.

There’s already a growing acceptance of non-cash transactions in Africa, e-commerce sales are also growing, and there is expected continued growth in wallet adoption.

With a growing population, and increasing mobile and internet penetration, there is an increasing need for Paytech solutions to serve Africa’s unbanked. Paytech is the most popular because it deals with the way people transact in money-which is the principal economic driver. That sub-vertical has changed how we make payments and transactions, with more people now switching to mobile and digital payment methods.

There is a massive opportunity to evolve the payment experience with innovation and technology to build more payment infrastructure to connect African businesses worldwide.

With six million people getting access to the internet every year in Africa, businesses have to take advantage. The only way to scale is to reach as many people as possible. What is truly needed is the infrastructure that connects Africa to itself and the rest of the world.

Cross-border payment is still a massive challenge for businesses across the continent, with more than 70% of the over 150 million businesses still lacking access to cross-border payments. The existing payment infrastructure cannot help; on average, it takes days for settlements and costs a lot of money for the transaction. This challenge locks out Africans from participating in the global economy.

Amidst these challenges, Africa has managed an intra-trade value of $69 billion as of 2019 while contributing just 3% in international trade volume, way lower than other regions. African businesses must expand and diversify their participation in international trade and global value chains to reduce poverty on a large scale and transform their economies. Achieving this is impossible without an easy transfer of value across Africa and the rest of the world.

With Fincra, businesses can receive payments from customers anywhere globally

While fintech has vastly improved mobile money and consumer payments, cross-border payments that connect Africa to the rest of the world remain primarily unsolved; this is a mission that drives us at Fincra.

Fincra is a payment infrastructure provider that cuts across the payment landscape and caters to businesses. Via our robust payment APIs and the Fincra Portal, onboarded businesses can use our Receive Payments feature to receive payments in their local currencies from anywhere globally via cards, bank transfers, mobile money or Checkout. We help our merchants reduce transaction time from days to a few minutes with no cost for chargebacks.

We want to create a world where value movement is as instant and easy as sending a text message and connecting local merchants with the globe. Making the payment experience seamless and reliable for African businesses can help them connect to the global economy and unleash a wave of prosperity across the continent.

Also included in Fincra’s suite of payment products is Make Payments, which businesses can use to make local and international payments to bank accounts, mobile wallets and cash pickups.

Fincra also offers Banking as a Service with the issuance of Virtual Accounts. Businesses can use Virtual Accounts for quick payment collection from customers in the United Kingdom, Europe, Nigeria, the United States, and other African countries in USD, GBP, EUR, and NGN, and easy settlement into their Fincra wallet with no hidden fees or the headaches of international banking. Fintechs can also integrate Fincra’s API to issue bank accounts to their customers for seamless payment collection in the available currency. 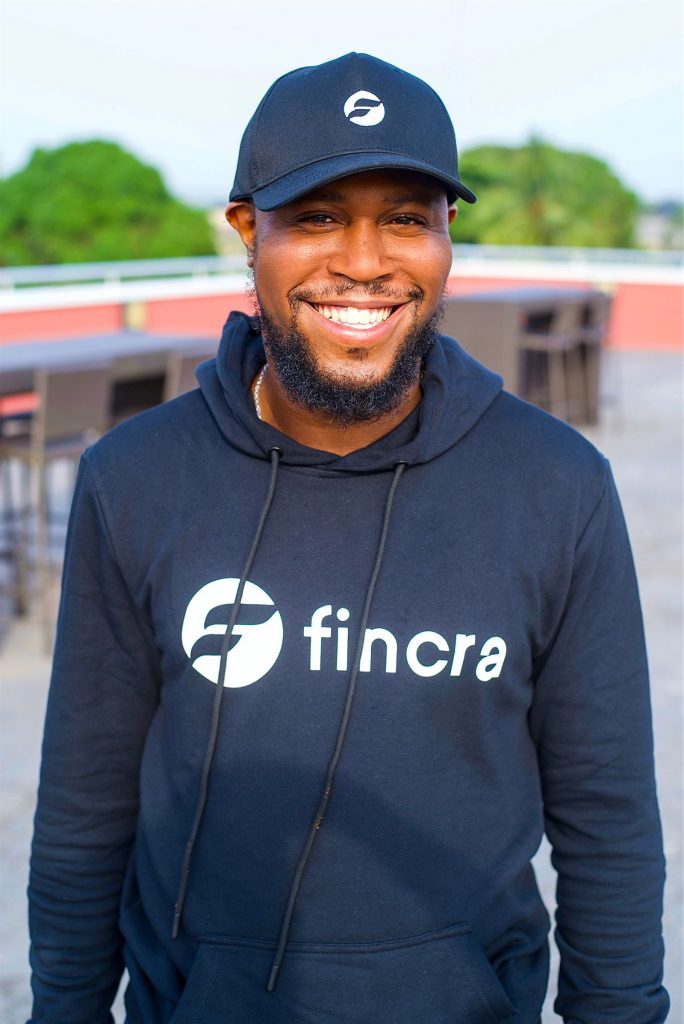 Ayowole leads a world-class team at Fincra in building online and offline payments infrastructure for fintechs, platforms corporates & global businesses operating across the globe. Passionate about developing a better global payment system for today’s digital world, Ayowole is convinced that Africa has enormous potential to become the new frontier of this financial opportunity. Ayowole has a background in Finance from Stanbic IBTC Bank Nigeria, where he was a key member of the Credit Risk Management Team, and a growing career spanning 7+ years. Prior to Fincra, he co-founded Quidax, one of Africa’s largest cryptocurrency exchanges where he led the Product, Business, Treasury & Customer Success teams.

Over the years, Ayowole has recognised the difficulties that businesses face with making and receiving payments across Africa and he has remained committed to lowering the barriers and solving the challenges. 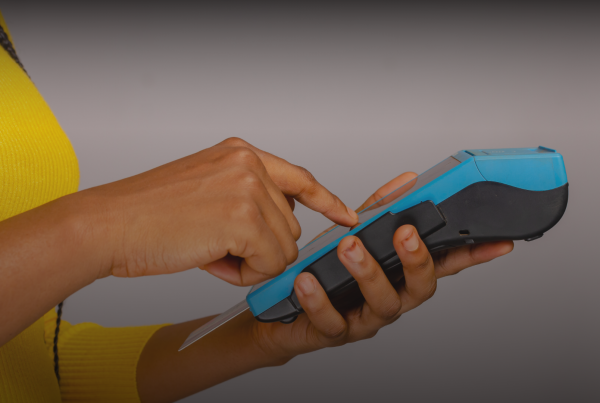 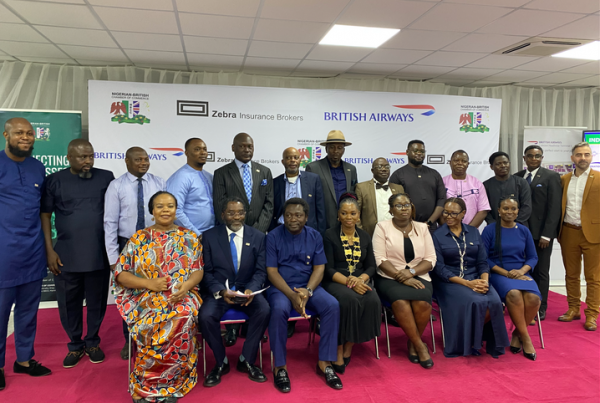 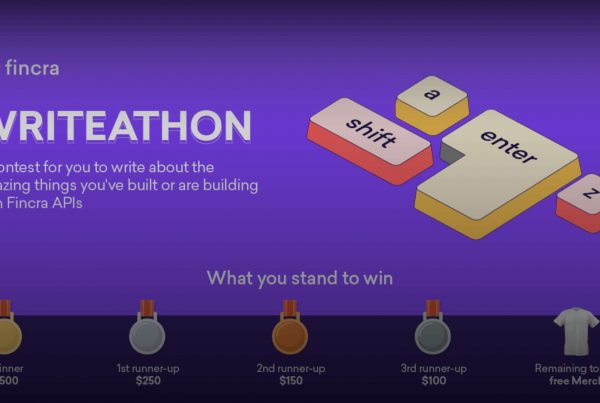